These are the principles upon which John Klatt Airshows, Inc. (JKAI) was founded in 1999. For nearly two-decades, John Klatt has brought world-class, breath-taking aerobatics to airshow audiences all across the world. Our goal is to entertain with a unique blend of precision, power and performance. We're honored to have valued relationships with our marketing partners, and we're committed to generating engagement with their amazing brands.

As a young child growing up in Eagan, Minnesota, John Klatt dreamed of flying, and his favorite pastime was listening to his father, an aircraft mechanic, tell aviation stories. His first “hands-on” experience in the aviation industry was washing airplanes and pumping gas to earn enough money for flying lessons. John received his private pilot ratings in 1986, and began flying a Taylorcraft L2-A by the time he was 18 years old. Today, he is recognized as one of the world’s top aerobatic pilots, having performed in over 300 airshows throughout the past 15 years.

John graduated from the University of Minnesota-Duluth in 1989, with a degree in Communications, and was commissioned as a second lieutenant in the Minnesota Air National Guard. As a proud member of the 133rd Airlift Wing, John flew the huge C-130 Hercules military transport delivering crucial supplies during Operation Restore Hope. He later transitioned to the F-16 Fighting Falcon and completed three combat tours in Iraq in support of the Global War on Terrorism. Lieutenant Colonel Klatt has logged more than 2,000 hours at the controls of the F-16.

Simultaneous to his military career, John began the long and difficult journey to become a professional aerobatic performer. The high degree of skill, concentration, and mental toughness required in this profession drew him to the world of aerobatics. He succeeded in his quest, and began performing in airshows in 1999. His presence, experience, and reputation in is unparalleled, and well known throughout the airshow industry. 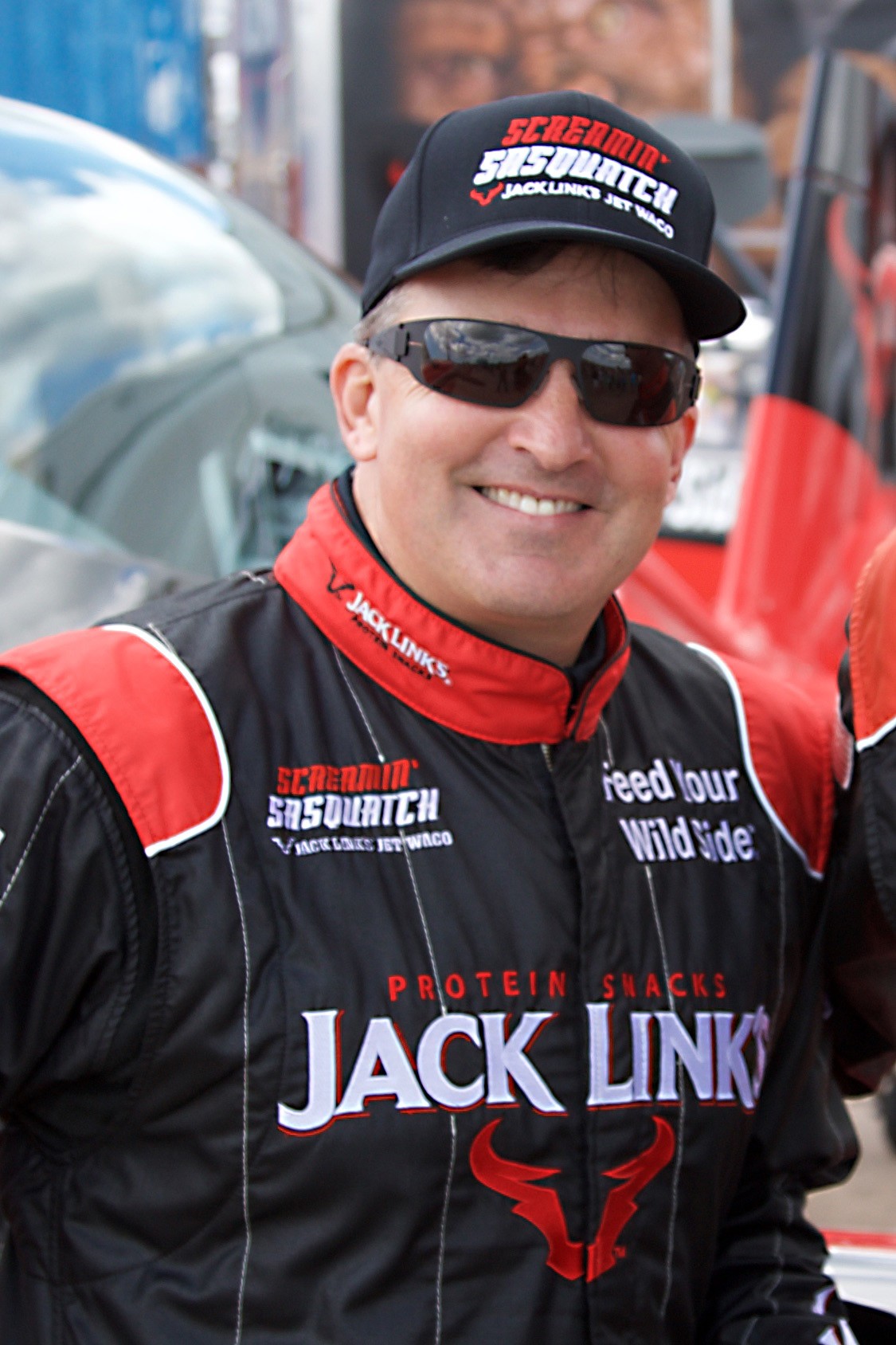 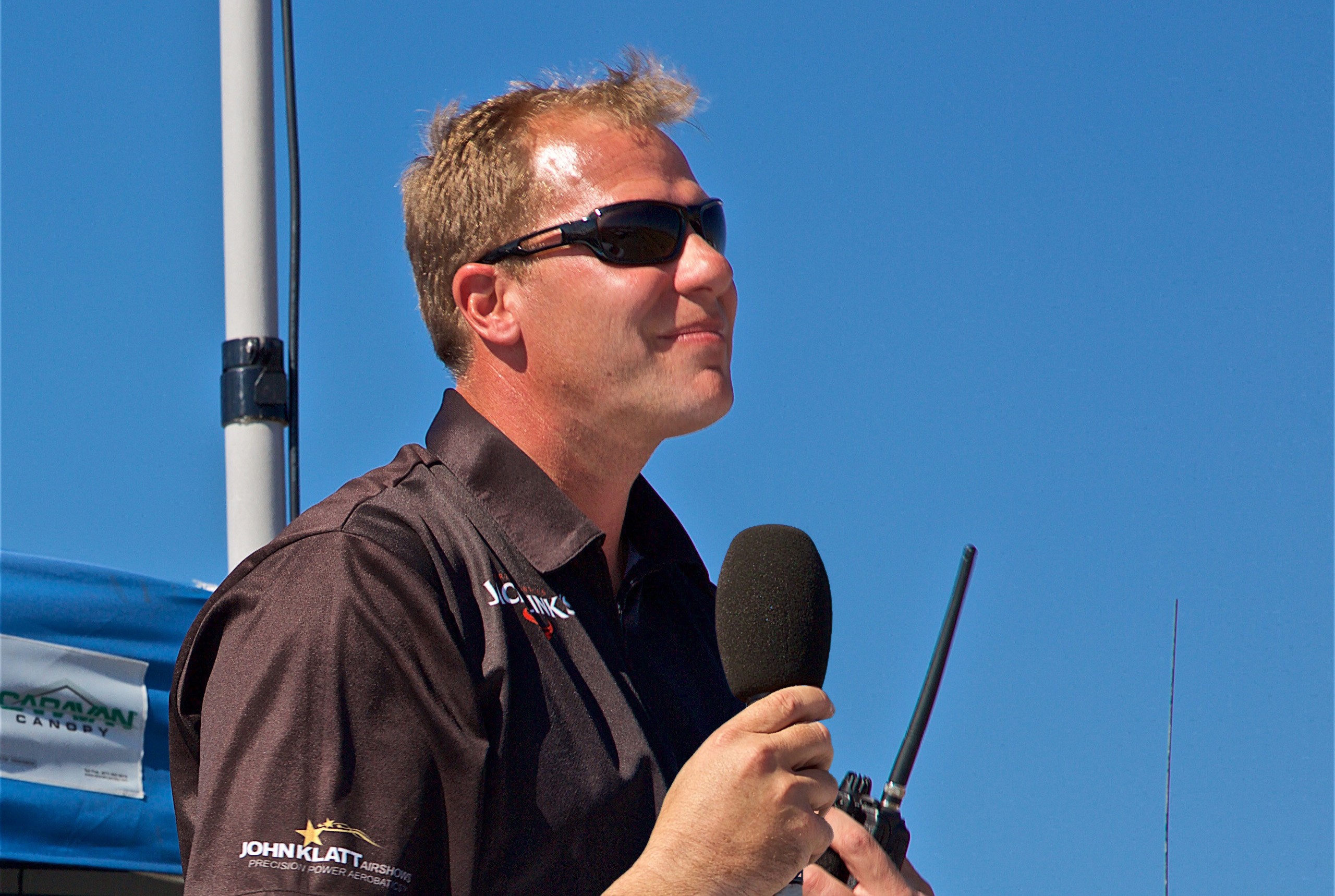 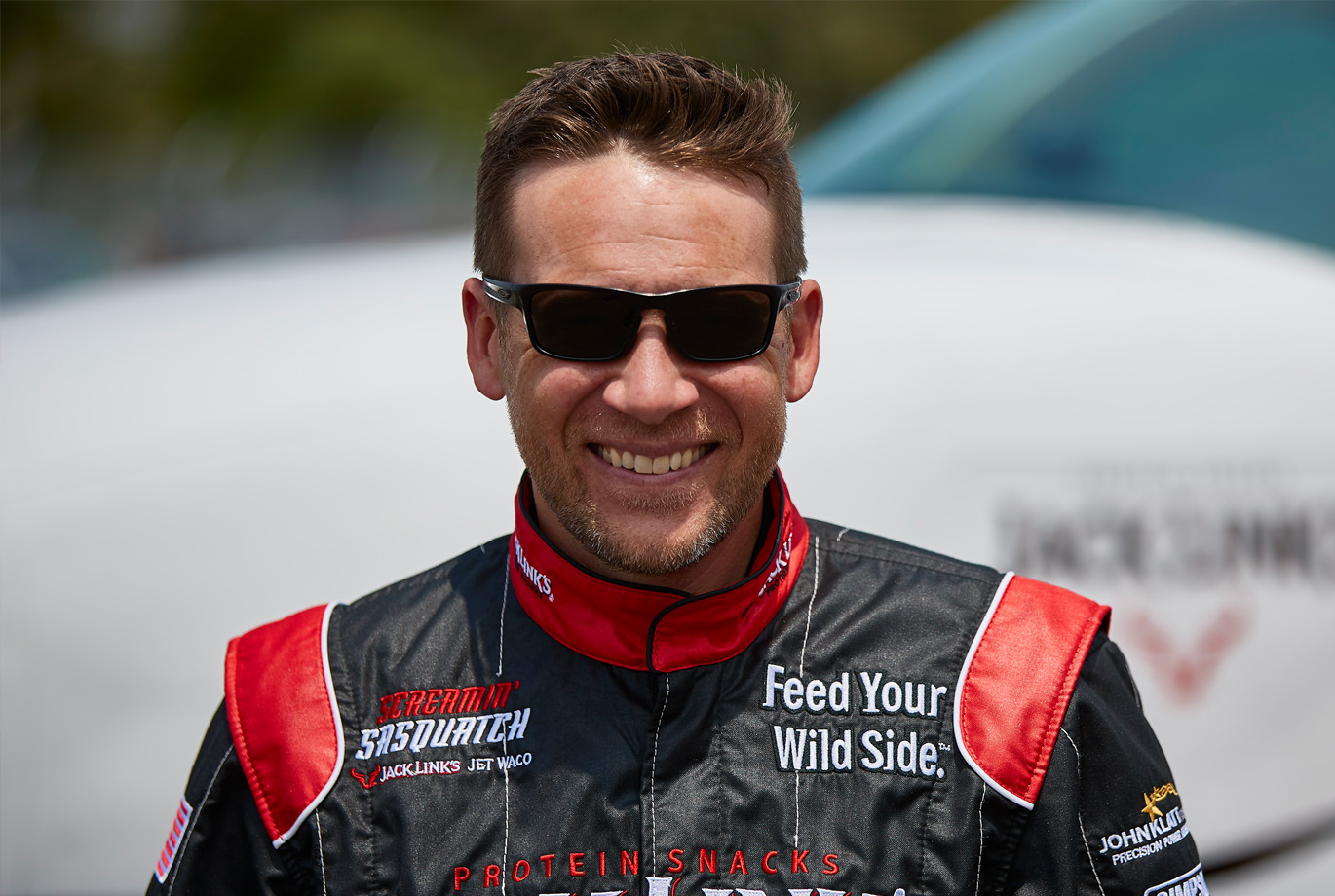 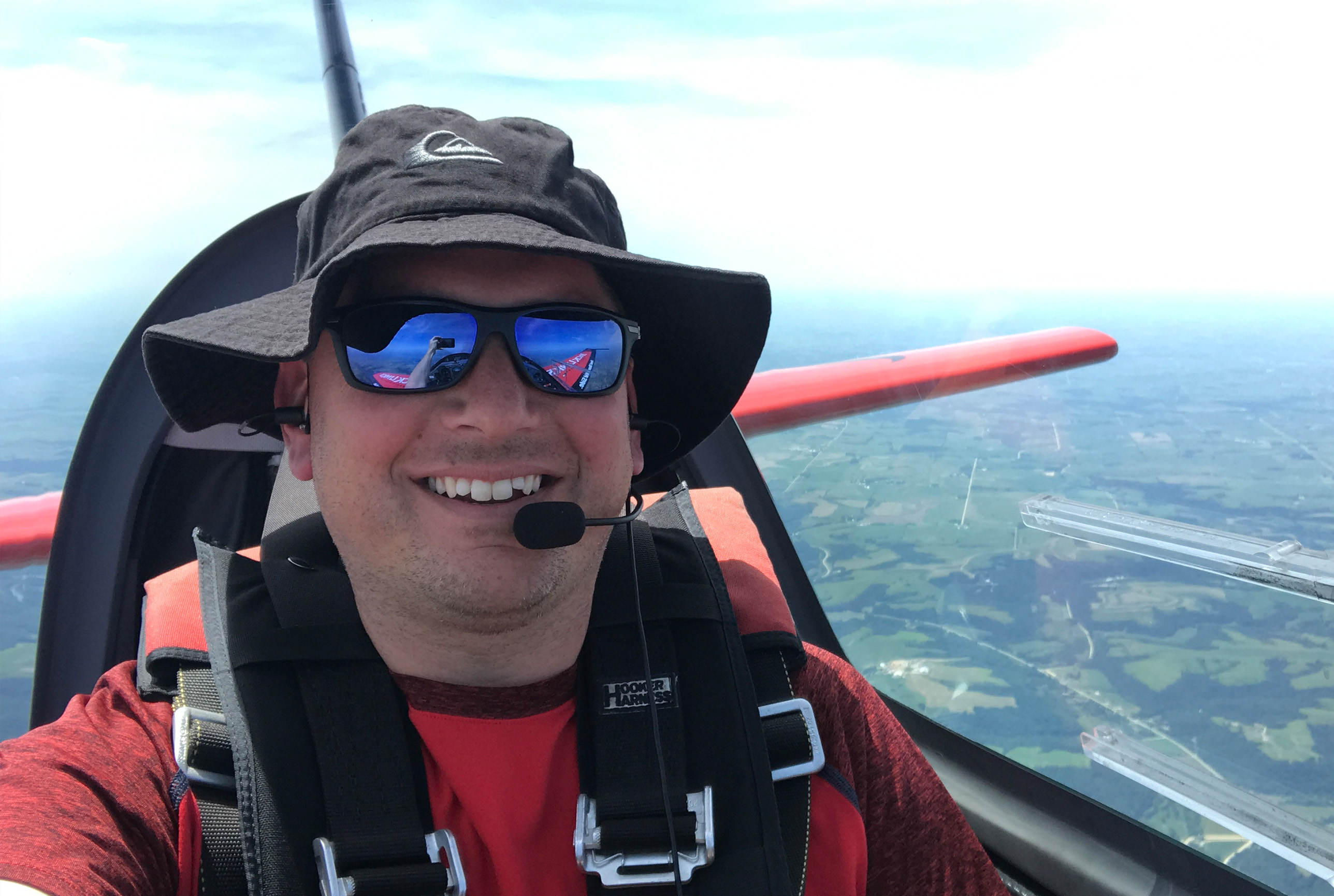 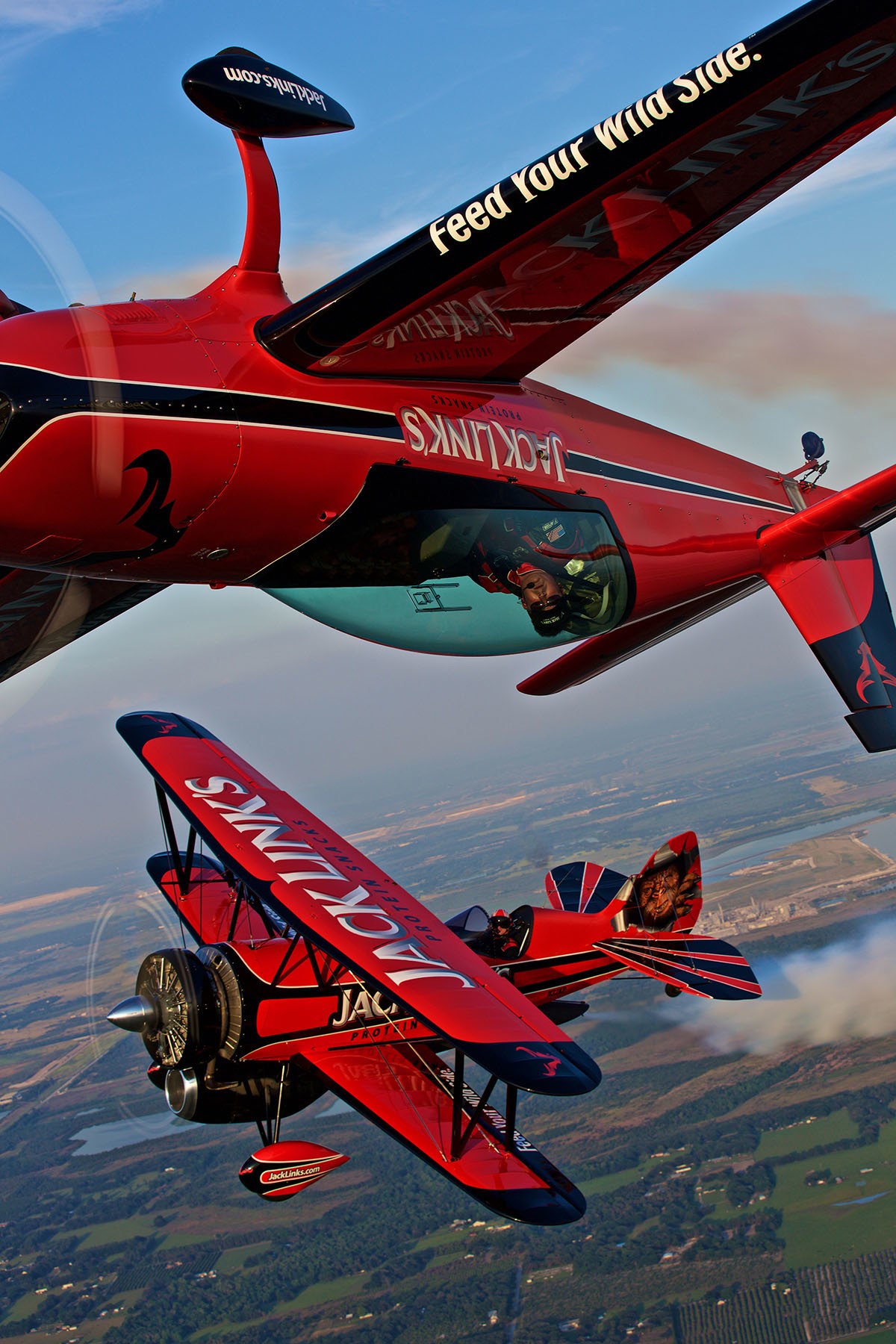 Starting life as a classic 1929 Taperwing Waco, this was once the aircraft of choice for barnstormers in the 1930’s and 1940’s. Our ‘Screamin Sasquatch has been completely redesigned and structurally reinforced using modern day engineering and materials, along with state-of-the art technology to allow the addition of a jet engine to the aircraft.

The Jack Link’s Jet Waco “Screamin’ Sasquatch” is powered by dual power plants: a Pratt & Whitney 985 radial engine and a General Electric CJ610 (J85) jet engine with 3,000 lbs. of thrust. Total thrust of the combined engines is rated at 4,500 lbs. A three bladed Hartzell propeller is used to harness the power of the 985 radial.

This system allows the plane to achieve feats other stunt planes are unable to do, along with reaching speeds up to 250 mph. Snap rolls, spins, barrel rolls and the hover are among the list of maneuvers this aircraft can perform. The plane has a thrust ratio of greater than 1 to 1, which allows it to accelerate going straight up.

The Extra 300L is used for media events, aerobatics training, and airshow performances.

The Extra is a two-passenger, FAA inspected, commercially available aircraft, purpose-built for aerobatics. It is one of the most widely flown aerobatic airplanes in the world today.